یکشنبه 6 شهریور 1390 06:13 ق.ظ نویسنده: جعفر شكری
طبقه بندی:عکاسی،
"هر کس در زیر درخت انگور و انجیر خود خواهد نشست....." (منسوب به میخای نبی)
"Everyone will sit under their own vine and under their own fig tree" --Micah 4:4
By the end of this article you might reconsider sitting only under a "fig tree". There are some extremely fantastic trees in this world: exotic, fragrant, fruitful, and simply beautiful. It is summertime in most countries now, so let's pause in a shadow of some of these exceptional living beings (even if you do not believe in "Ents", you will agree that some trees will have incredible stories to tell...).

Probably the most otherworldly and mysteriously named of them all is the Dragon Blood Tree, which we discussed in our Socotra Island article The Most Alien-looking Landscape on Earth: 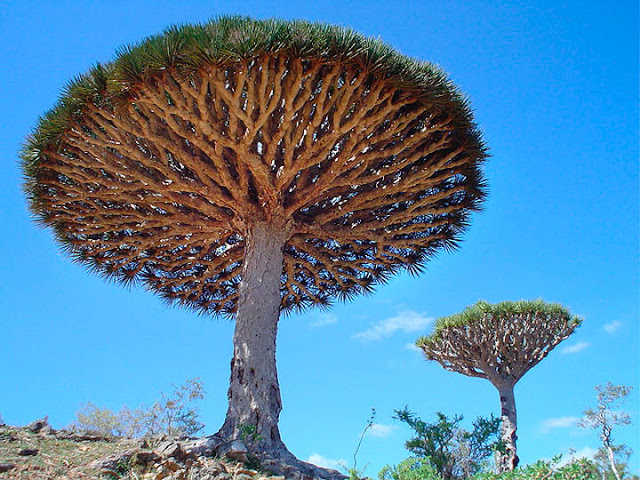 (images credit: Tristan, 2, 3)
The red resin that the tree produces is used (predictably) in lipsticks, ritual magic and alchemy. In voodoo rituals it seems to attract either love, or money (it's never both, you know) or can simply be used as a breath freshener, or toothepaste.
The aptly named Cannonball tree (common to northen parts of South America and Caribbean) often requires a warning sign under it:

(images credit: 1, 2)
The fruits will fall down once ripe, and since they are more than ten inches in diameter, they can easily kill you. So park planners try not to plant these trees close to sidewalks and paths. 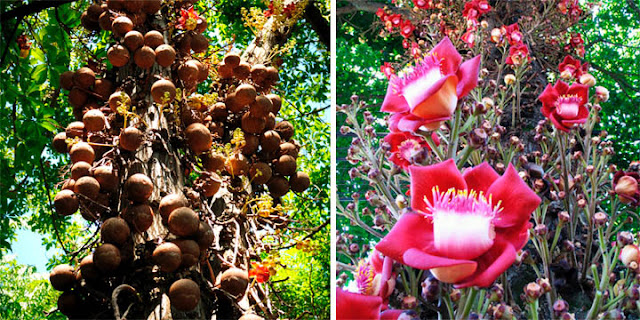 (images credit: 1, 2, via)
Once you come closer, however (exercising extreme caution, of course), you can observe wonderfully-shaped flowers: 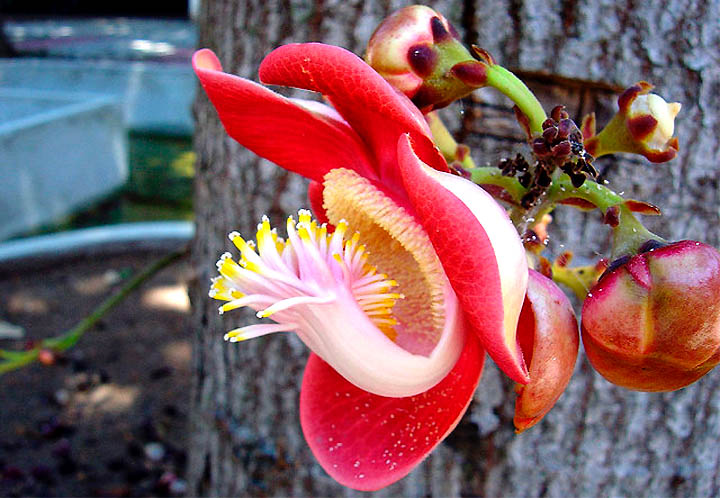 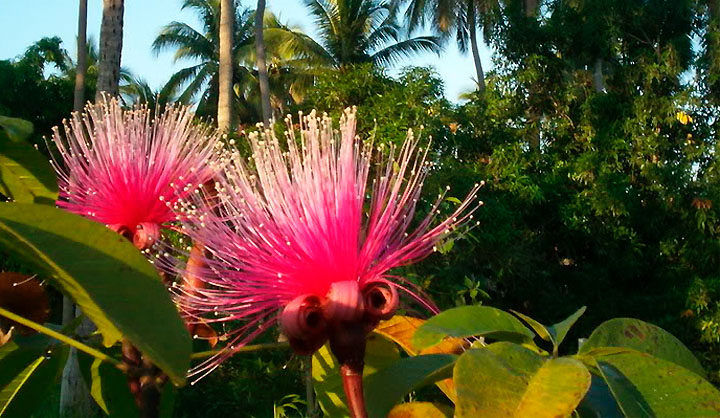 (image via)
This tree belongs to a baobab family, originates from India and brings a lot of color to many streets in Middle East and Asia (especially in Israel and India). It has large red flowers (Bombax ceiba means 'Orange Glow') - so intensely colored that they seem almost made out of plastic:

(images by Nataly, via and J. Jankovsky, via)
Another flower variety for this tree (this time from Hawaii):

(image credit: Dark Sevier)
Apparently this magnificent tree can be grown in miniature, like a bonsai tree, out of a single planted seed (left). On the right is Bombax Ellipticum, shaped like a turtle's shell:

(right image by Michael Buckner, via)
On the image below right is the strange bark of the Red Silk Cotton Tree (Bombax malabaricum): 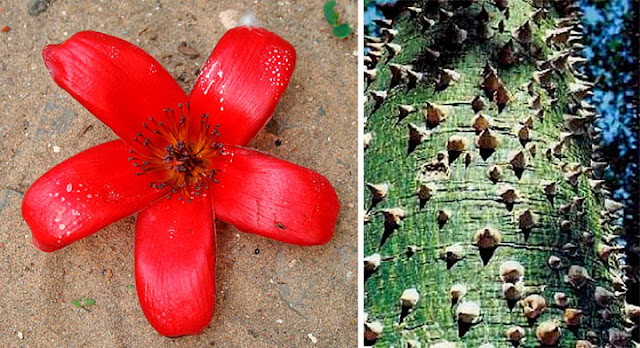 (images via 1, 2)
The demon of death... enveloped in Bombax roots
One kind of the Bombax tree even has a sinister story associated with it:
"According to the folklore of Trinidad and Tobago, the Castle of the Devil is a huge silk cotton tree growing deep in the forest in which Bazil the demon of death was imprisoned by a carpenter. The carpenter tricked the devil into entering the tree in which he carved seven rooms, one above the other, into the trunk. Folklore claims that Bazil still resides in that tree." 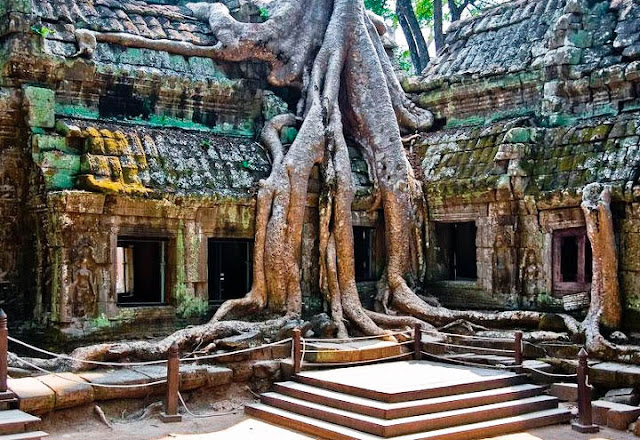 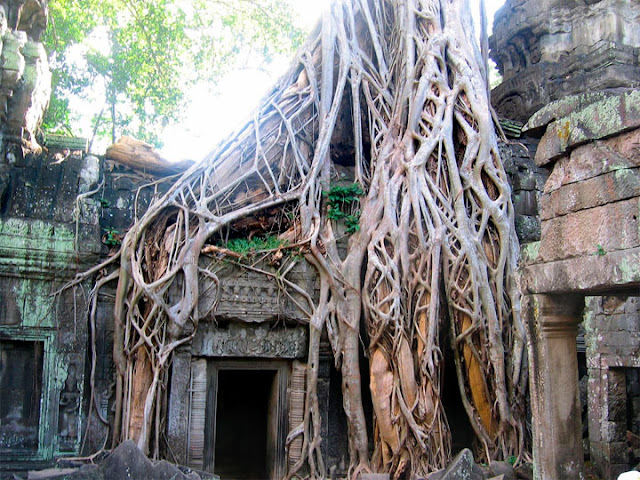 (Angkor Wat, Cambodia - image via, and at Ta Prom Temple, via)
Here is a giant Bombax tree, obviously mighty and wise, at the Ta Prom temple in Cambodia (left) - and another huge bombax root in India (right):

(images by Katandewan, via; right image via)
Another incredible tangle of roots can be found at Lake Camecuaro, Mexico, in Michoacan area - these are massive cypress trees standing in water: 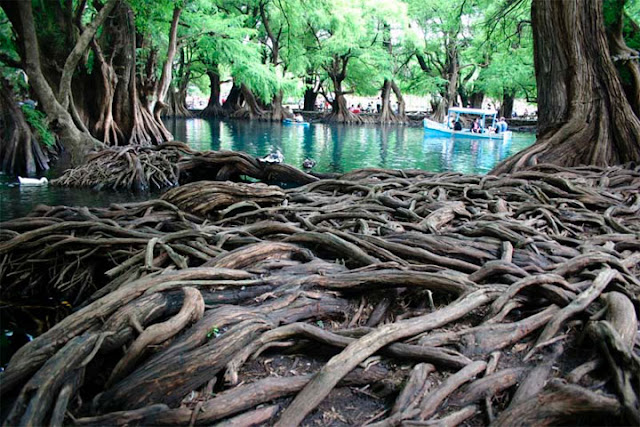 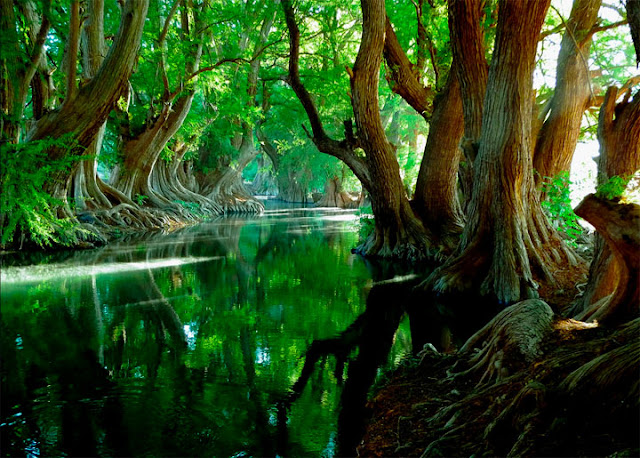 (image credit: Nikoniano)
"Upside-Down Trees" and The Avenue of Baobabs
Speaking of baobabs... The Monkey Bread Tree can come in many weird shapes, like the bottle shape on the right (Teapot Baobab)... or it can reach to the sky with the bare root-like branches, creating the illusion of being planted "upside down" (left): 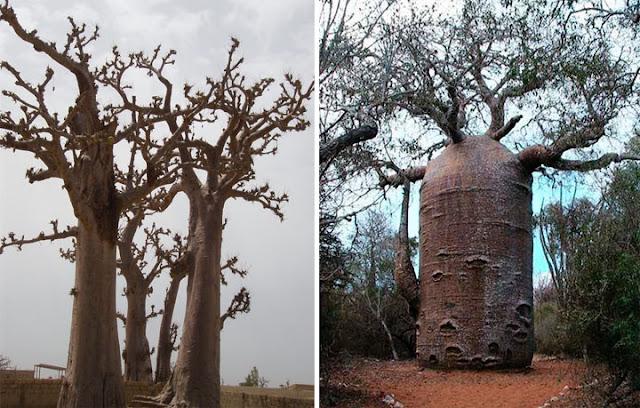 (right image credit: Giles Croissant)
Baobabs store water in their swollen trunks - as much as 31,700 gallon (120,000 l) of water. Some empty trunks were so big that they were routinely used as prisons in Western Australia. One such prison tree can fit up to 5 people inside: 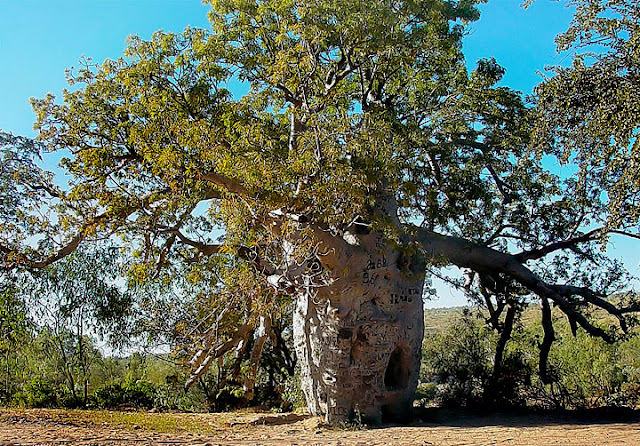 (image credit: Brian Yap)
So what about "monkey bread" name? The fruits of baobab are also called the "Judas Fruit" (the fruit has 30 seeds inside, like 30 "pieces of silver"). The beautiful creamy white flowers (right) are pollinated by bats: 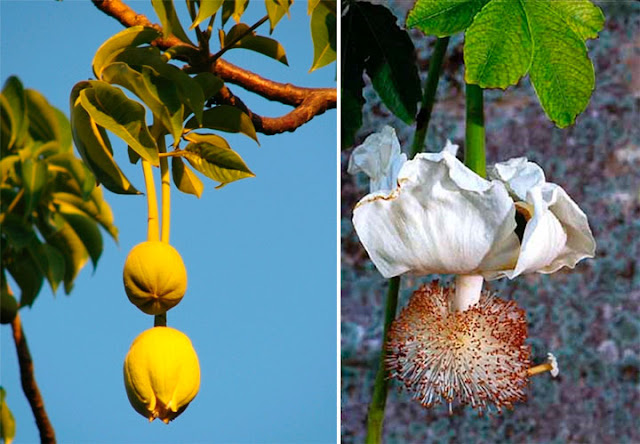 (images credit: Forest & Kim Starr, 2)
These grand trees can be photographed the best at the Baobab Avenue, near Morondava, in Madagascar: 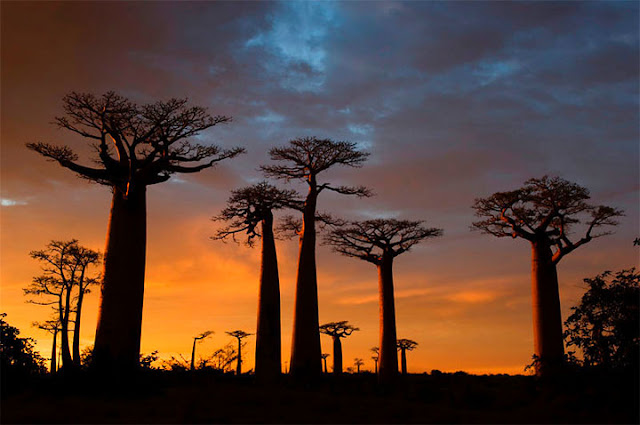 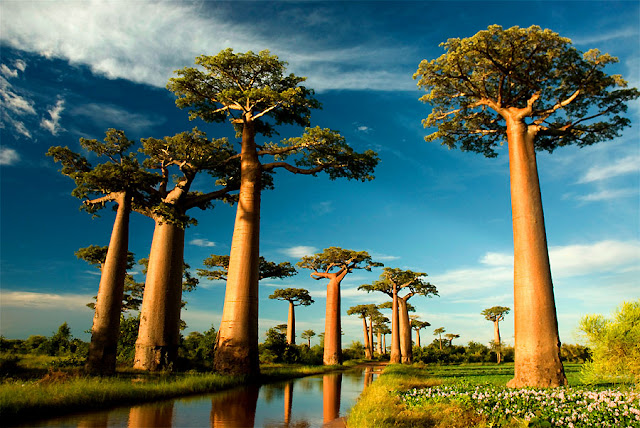 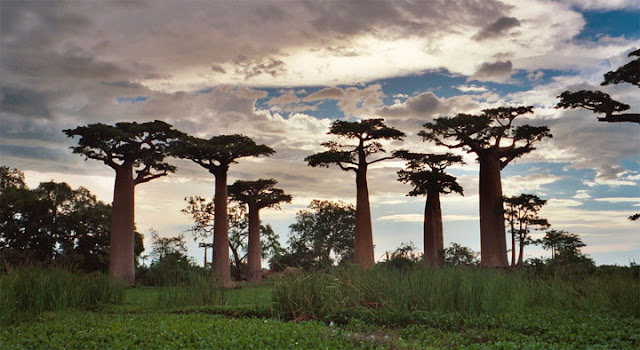 (image credit: Pat Hooper)
This spot is one of the most magical on Earth, and easily could be called One of the Seventh Wonders of Africa. It reminds me of some of fantasy landscape art, for example "The Renegades of Pern" by Michael Whelan - see it here.

The Most Sheltering Tree & The Walking Tree
We started by speaking about sitting under a fig tree. Well, there is a huge fig tree, with a wonderfully spread out shadow. It's the Banyan Tree (Ficus benghalensis), the National Tree of India, also called the Bengal Fig. Here it is in Hawaii: 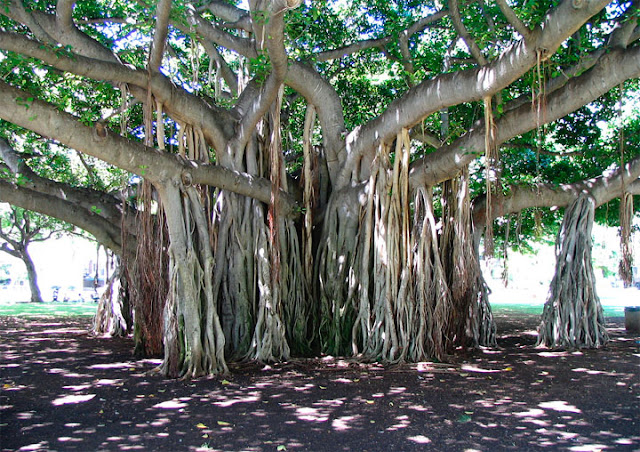 (image credit: Billy Crafton)
In India people worship under this tree, wandering between the strands of mighty aerial roots - the tree can grow as large as the whole city block, for example the Great Banyan Tree, which is a forest in itself: 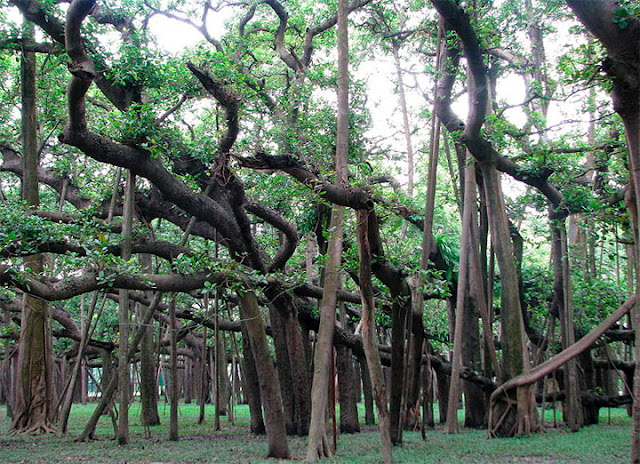 (image via)
At one point it was "the widest tree in the world in terms of the area of the canopy... A 330 m long road was built around its circumference, but the tree continues to spread beyond it."
This is not a forest, but a single tree with multiple aerial roots! - 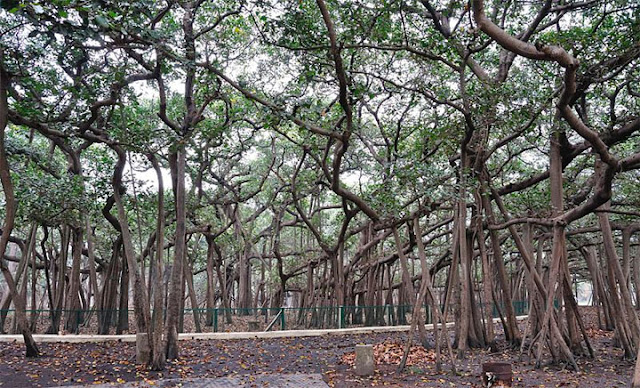 (image via)
"The circumference of the whole complex of trees grown from the one central ancestor - still very much alive and all connected to it by the roots visible well over human height - is measured in kilometers."
Speaking of the aerial roots, or "legs" with which a tree can reach into the ground and thus "extend" itself - there is a Walking Tree (more info) equipped with the unusual "stilt roots", which supposedly make it more stable... or let the tree wander at night? (just kidding)

(images via)
More trees to slowly grow on you and make your mind branch out in every direction
Jacaranda tree with beautiful purple flowers (A Jewel of Australia and New Zealand): 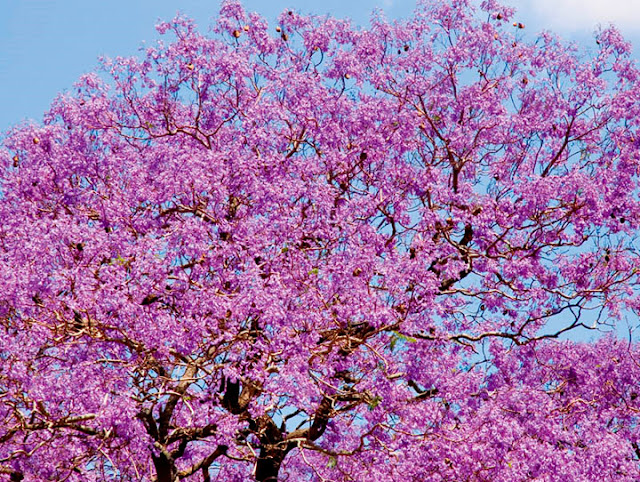 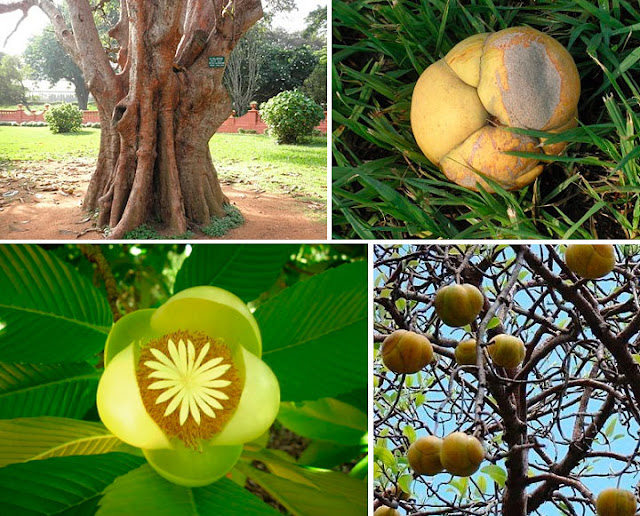 (images via)
Some unusually shaped trees, found around the world: naturally shaped by wind and elements - 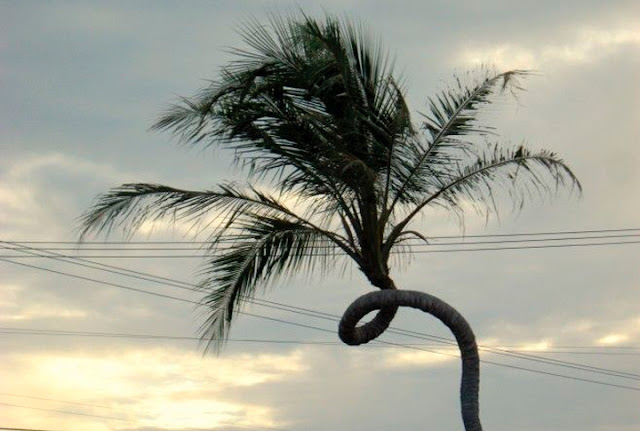 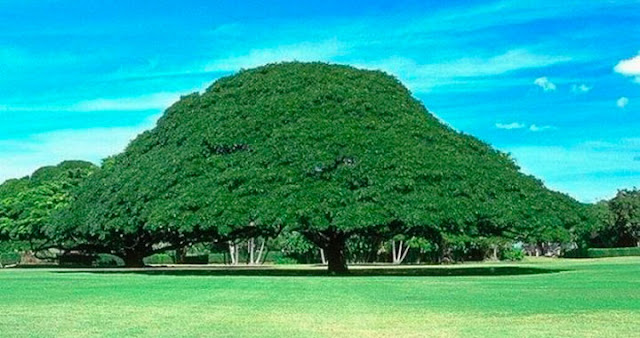 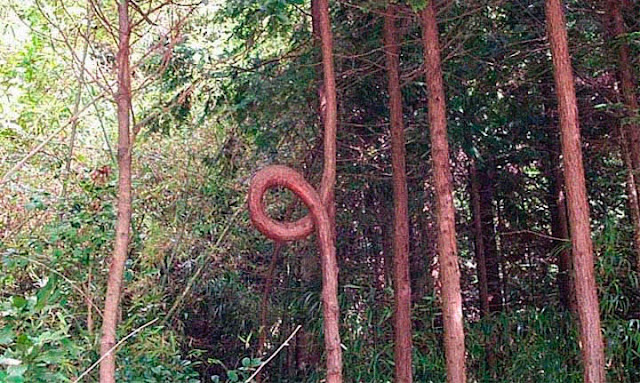 (original unknown)
- and shaped by humans as part of arboreal art (we wrote an article about such artists - Living, Growing Architecture): 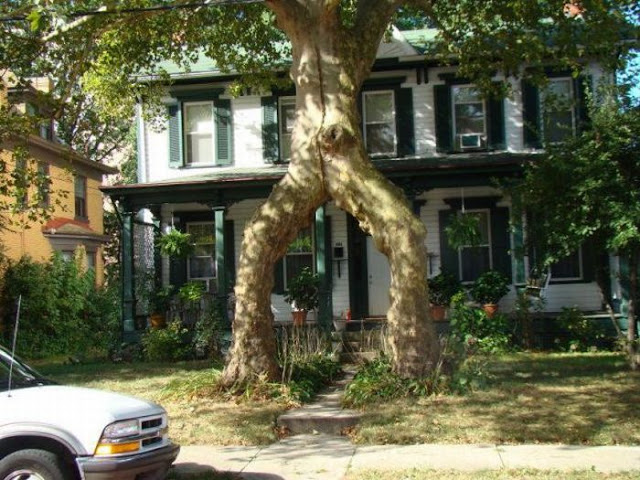 (originals unknown)
Even dead trees can be incredibly expressive: 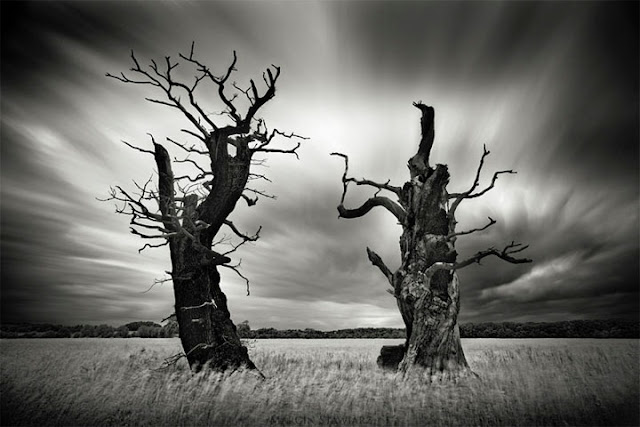 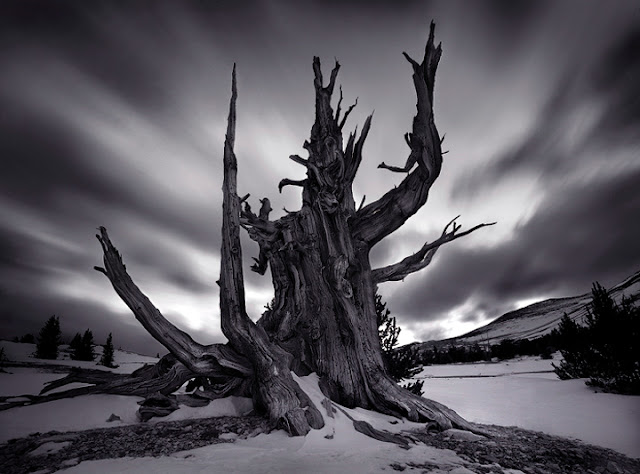 (image credit: Marc Adamus)
Probably the most enchanting tree image... so Tolkien-esque that you can almost hear the elves singing: 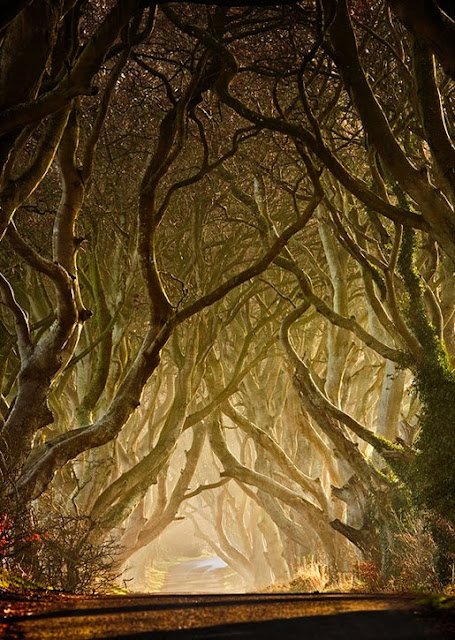 (image credit: Gary McParland)
-------
BONUS:
Check out these beautiful glass trees by an unknown artist... let us know whose work is this: 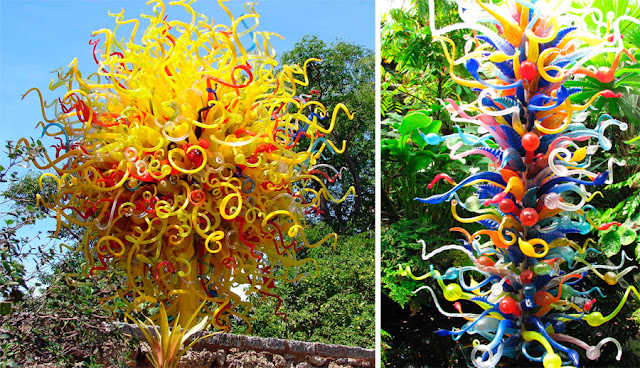